ATHENA has been involved in the business of exporting and supplying a wide range of evaporator & Dryer for Industrial/Distillery effluent concentration & drying. Our company proposed following scheme for effluent treatment:

TYPES OF EVAPORATORS UNDER USE BY INDUSTRY

Concentration of highly –sensitive material require a minimum time of exposure to the heated surface. This can be done in falling film evaporators. The tubes are vertical and the product forms a thin film on the inside of the tubes, which are surrounded by steam. The product is preheated to a temperature slightly above the boiling temp. in the evaporator. From the preheater, the product flows to the upper section of the evaporator.

By means of specially shaped nozzle, product is distributed over a spreader plate. The product is slightly superheated and therefore expands as soon as it leaves the nozzle. Part of the water is vaporized immediately.

The steam formed forces the product outwards against the inside of the tubes and it run down the walls of the tubes as thin film. The water content of the film evaporates rapidly as the product passes through the tubes. A steam separator is fitted under the evaporator and separates the vapor from the concentrated product.

The resident time in the falling film evaporator is very short, as only a small amount of the product is treated at the same time.

There is no hydrostatic increase in temperature in a falling film evaporator which means that the value of the saturated vapor pressure corresponds to the vacuum in the tubes. The vapor reaches its maximum velocity at the bottom of the tubes shortly before the discharge end. 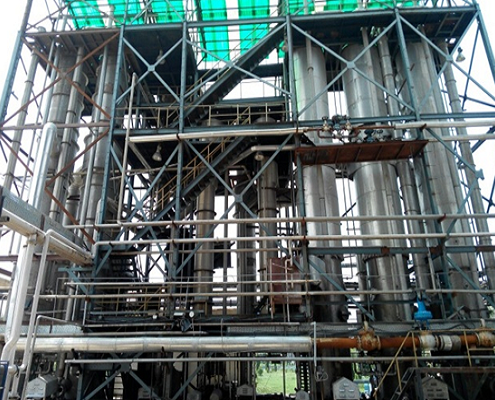 The forced circulation evaporator was developed for liquors, which are susceptible to scaling or crystallizing. Higher co-efficient are obtained in forced recirculation evaporator. Here a centrifugal pump forces the liquid product through the tubes at an entering velocity of 2-6 m/s and the heating medium surrounds the tubes carrying the liquid. Pressure drop and hydrostatic head in combination are frequently great enough to prevent the liquid from boiling in the tubes, so that the vapor generated is flashed as the liquid enters the vapor separator. Since the velocity of the flashing mixture is high, impingement deflector/baffles in the separator are important to minimize entrainment. Liquid returns to the pump inlet, where it meets incoming feed; vapor leaves the top of the evaporator body to a condenser. Part of the liquid leaving the separator is continuously withdrawn as concentrate. 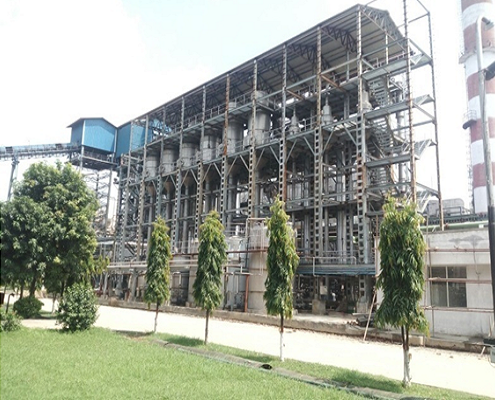 Concentrated effluent is mixed with back up material for reconditioning in two screw paddle mixer which is led to Agitated fluid bed for further reconditioning. Once product is reconditioned it is transporting system as well specially designed flex plate is used. Hot air at 160-350ºC can be used as heating media. Final product of required moisture content after cooling in FBD last section can be packed directly.

Application of agitated thin film dryer, spray dryer, rotary dryer in drying many industrial effluent have been established. However any drying or drying combination should be studied thoroughly for its commercial viability. 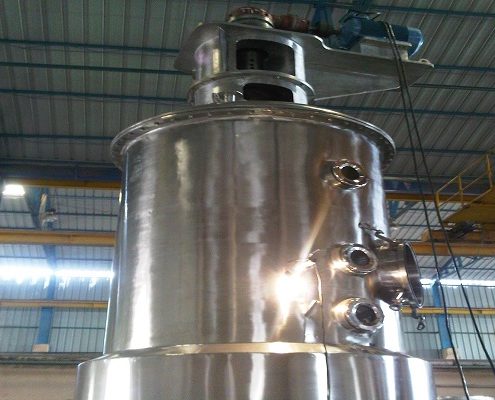